If the BBC reported 9/11 like it reports terrorist attacks against Israel....

Arabs massacred by Americans in day of tit-for-tat violence 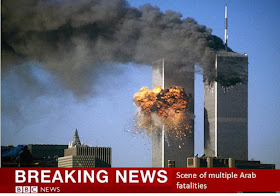 The cycle of violence in America spiralled out of control today when a series of violent incidents left thousands dead, including many Arab and Muslim civilians. UN sources and Al Jazeera have confirmed that many of the Arabs killed were refugee children who had fled from oppression. American claims that they too suffered “many civilian deaths” have been strongly denied by the UN-affiliated relief workers in the Al Qaeda organisation who maintain that the only Americans killed were military personnel and illegal settlers.

The violence started when one of five unarmed Arab civilians, who boarded a 767 aircraft in Boston, was refused permission to fly the plane, despite having a valid flying licence. The American authorities have been imposing increasingly tight restrictions on the freedom of movement of Arab civilians within the US. This humiliation to their dignity has created, not unsurprisingly, deep anger and resentment among Muslims in the US. When the fully qualified pilot was denied the opportunity to work in his chosen profession, he became understandably angry. The outnumbered Arab men were then attacked by members of the crew, but what really happened next may never be known. What is certain is that all of the five Arab civilians were killed, along with the plane’s other occupants (primarily military and intelligence personnel along with some illegal American settlers) when the plane crashed into the North tower of the World Trade Center. Al Jaziera and the UN confirmed that the building (which housed a mosque) contained many Arab refugee children, who were all killed in the attack along with a number of Muslim workers. Some illegal American settlers dressed as businessmen may also have perished.

As news of the Muslim civilian deaths became known, it is believed that Arabs on another aircraft reacted with understandable passion, battling with military and security personnel. This plane soon crashed into the south tower of the Word Trade Center. After this second crash the US military ordered an unprecedented grounding of all civilian flights over US airspace, thus denying all Muslims living in the US the right to travel. On hearing news of this racist attack on their human rights and livelihood, a group of Arab militants on another airplane mounted a daring tit-for-tat strike. With nothing else to lose, and in sheer desperation, the militants crashed the plane they were travelling in into the very heart of the brutal US military machine – the Pentagon – killing scores of soldiers.

In an escalation of the violence - and without any United Nations mandate  - the US military responded by threatening to shoot down any airplane still flying that was piloted by Arab Muslims. This brutal, illegal and racist measure led to the final, and most outrageous act of violence of the day, committed by a group of self-styled American settler vigilantes aboard flight 93 to San Francisco. On learning that their airplane was being flown by an Arab pilot, the American settlers took it upon themselves to massacre all the Muslim Arabs on board. In the ensuing struggle the Arab pilot was savagely killed and the plane crashed into a field, killing all the occupants, many of whom were Muslim refugee children. The US military is likely to have to accept full responsibility for the final massacre, since they had given messages to the settler passengers on board flight 93 that the Arab pilots were planning to crash the plane into the White House, even though no proof of such a wild conspiracy had been presented to the United Nations. The French and German leaders have already demanded a UN enquiry into the massacre of Arab civilians.

It is expected that any UN enquiry will also determine the cause of the complete collapse of both of the twin towers. Early evidence provided by reliable sources from the Palestinian Authority, The Syrian Government, the New York Times and Liberal Arts Professor Ward Churchill suggests that this must have been a joint operation between the CIA and the Israeli Mossad. 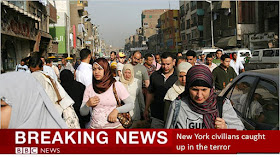