Stephen Reicher is the so-called "independent scientist" on the Government’s SAGE committee who has been the most prominent in the campaign against Cummings and Boris Johnson. In fact, he is not a scientist at all. He is a social psychology professor. And, as for his 'independence', here he is in his own words on Twitter (screenshot in case he takes it all down). First, regarding Boris and Cummings: 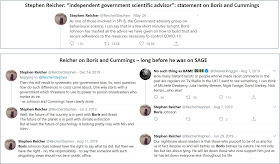 When he uses his credentials  "as a Jew" to spread anti-Israel propaganda and demand  it should be boycotted, he seems to rely on antisemites for his material: 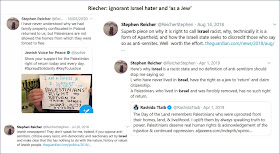 As you would expect he is a big fan of Corbyn 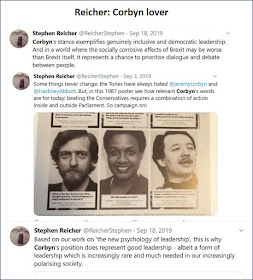 And of course he has an obsessive hatred of Donald Trump

There's plenty more on his twitter feed @ReicherStephen.
Reicher is by no means unusual of the Government's 'scientific/academic' advisors. SAGE is completely dominated by people with exactly the same worldview.
at 7:42 pm
Share