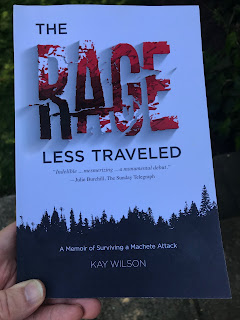 Kay Wilson is the British Israeli tour guide who, in 2010, miraculously survived a brutal machete attack by two sadistic Palestinian terrorists (Aiad Fatfata and Kifah Ghanimat) while hiking in a forest near Jerusalem. The American tourist she was escorting - Kristine Luken - was murdered in the attack. The terrorists simply wanted to 'kill some Jews' (although Kristine was in fact a Christian).  In this book Kay describes in detail the attack, how she survived, and her long road to recovery.  The book is both harrowing and inspiring, and while it is a very personal account it also provides many insights into Israeli society. Once you start reading it you will find it difficult to put down. Yet, publishers refused to publish it because it does not fit the mainstream narrative of "Palestinians as victims".

Although it is not a point that Kay focuses on herself in the book, it is important to note that the terrorists who were convicted of the attack are held in the highest esteem in Palestinian society (receiving a monthly stipend of $3,410 as reward for being officially 'Heroes of Palestine') and also received full legal support from the Israeli state, while being housed in the relative luxury of an Israeli prison. This contrasts with the struggle Kay and her carers have to cope with the aftermath of the attack. As a further example of this contrast, the book describes how, during the trial, the Israeli court failed to provide an English translator for the Luken's victim statement, yet provided Arabic translators for the terrorists.

There are many other remarkable insights in the book, including Kay's first meeting with Kristin's parents, the fact that the terrorists did not know Kay had survived the attack until she stood up to testify at their trial (this caused them to argue between themselves); and also how Kay first heard about the arrest of the terrorists who attacked her, during a shared taxi journey in Jerusalem (when she was going to complete the forms needed to get a meagre disability allowance). The other passengers did not know it was Kay they were talking about.

There is also the revelation that Kifah Ghanimat had committed a string of previous terrorist attacks including the murder of Netta Blatt-Sorek the previous year. As the trial of Ghanimat was for the murder of Netta as well as Kristine, the story of Netta and her family features prominently in the book.  As Kay says, she remembered this being assumed at the time to have been 'suicide'. This is a recurring problem I have discussed on this blog whereby the Israeli authorities and media are desperate to downplay the possibility of a terrorist attack. This was despite the fact that Netta had been bound and stabbed. Indeed, this curious obsession to find some other explanation - other than simple Jew hatred - to 'explain' Palestinian terrorism was also evident in the case of Kristine and Kay;  the attack on them was wrongly speculated to have been 'in revenge' for Israel killing a Hamas commander in Dubai. But Fatfata and Ghanimat never said anything about that. They admitted they just wanted to kill Jews.

Kay also reminds us that, for victims of Palestinian terrorism there is always the danger that their torment will be increased by the possibility that the killers will be released as part of a 'prisoner exchange deal'.  Kay describes how shortly after Fatfata and Ghanimat were convicted came the news that Israel was going to release over a thousand convicted terrorists in exchange for the captured soldier Gilad Shalit. Kay feared that her attackers would be among those released and that this would have destroyed her trust in the country.  Fortunately, they were not, but many killers equally as sadistic and depraved as Fatfata and Ghanimathad were; and thousands of Israelis (such as Frimet and Arnold Roth) suffer the double agony of knowing the killers of their loved ones are free and living in luxury as 'heroes of Palestine'. Hopefully, one lesson of this book will be that no such further releases of convicted terrorists can be justified.