Update: As you can see from clicking the link, the video has now been removed from the Speak Out Challenge website but here below is a screenshot I saved and the whole video is actually interspersed with this response video from Brian of London which is also on my update here. 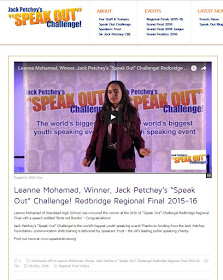 UPDATE: see here for good news and bad news outcome to this story.

Thanks to Daphne Anson for first alerting me to this story.


To enable young people (aged 11 – 25 years in London and Essex), to achieve their potential by inspiring, investing in, developing and promoting activities that increase their personal, social, emotional and physical development.

Obviously, you make a hate speech containing nothing but blood libels against the State of Israel (a speech that also includes the statement "Islam is perfect" and ends with the raising of the Palestine flag and the call to "Free Palestine" which is wildly applauded). Here is self-explanatory letter I have written to the person in charge of this particular scheme at the Charity:

I have been a long term supporter of the Jack Petchey Foundation [personal details were added here].  What I was not aware of was that the Charity was now in the business of supporting vicious blood libels against the State of Israel.

Specifically, I have watched the speech by Leanne Mohamad of Wanstead High School  that won the 2015-16 Jack Petchey “Speak Out” Challenge Redbridge Regional Final. This speech consists of three minutes of solid lies and blood libels claiming that every day since 1948 (when the State of Israel was established) the 'defenceless' Palestinians have been slaughtered, with 30,000 children murdered.

For the record there are no verified instances of Palestinian children being 'murdered' by Israel, although many dozens have died as a result of Hamas and other Palestinian terrorist groups launching unprovoked rocket attacks against Israeli civilians (often from schools and hospitals) and then using their own children as human shields when Israel has responded. In fact, Amnesty International (an organisation that has traditionally been hostile to Israel) reported just this week that most of the child casualties of the 2014 conflict (that was started by Hamas) were actually killed by Hamas rockets falling short of their 'target'.  In contrast, there have been several hundred Israel children murdered by Palestinian terrorists who all operate as part of 'official' groups (Hamas, Fatah, and Islamic Jihad) and each such murder is a cause of rejoicing in the Palestinian territories. A catalogues of the most recent murders can be found here. Three especially brutal examples you should read up about are:the Ma'alot School massacre; the Haifa school bus massacre; and the Fogel family massacre.

As for the lie that Palestinian children cannot sleep because they are 'bombed every night', perhaps Ms Mohamad is actually thinking of the Jewish children of Sderot who really were bombed almost every day between 2005 and 2014 by the Palestinians of Gaza.

You must surely be aware that supporting hateful and vicious political propaganda puts the Jack Petchey Foundation in breach of its Charity Commission obligations as made clear in the Commission's document here.

Before I make a formal complaint to the Charities Commission I would like to know what the Charity is going to do about it and, in particular, whether and when it plans to at least put the record straight for the children of Wanstead High School, in terms of ensuring they hear the truth about what is happening in 'Palestine'.

I have also written to Mr Hamlyn (whs@wansteadhigh.co.uk) the Head Teacher at Wanstead High School and Trudy Kilcullen  (CEO of the Jack Petchey Foundation CEO, mail@jackpetcheyfoundation.org.uk). And I copied in Jonathan Arkush (President of the BoD) as this must surely be of concern to them.

UPDATE: see here for good news and bad news outcome to this story (including response to my letter).

Incidentally I should really sue Ms Mohamad for plagiarism** (**satire for all you antisemites out there) since it seems her speech was based entirely on my definition of what it means to be a Palestinianist: 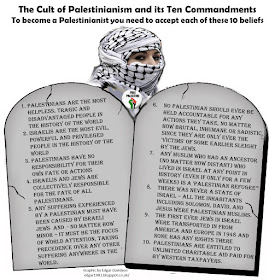