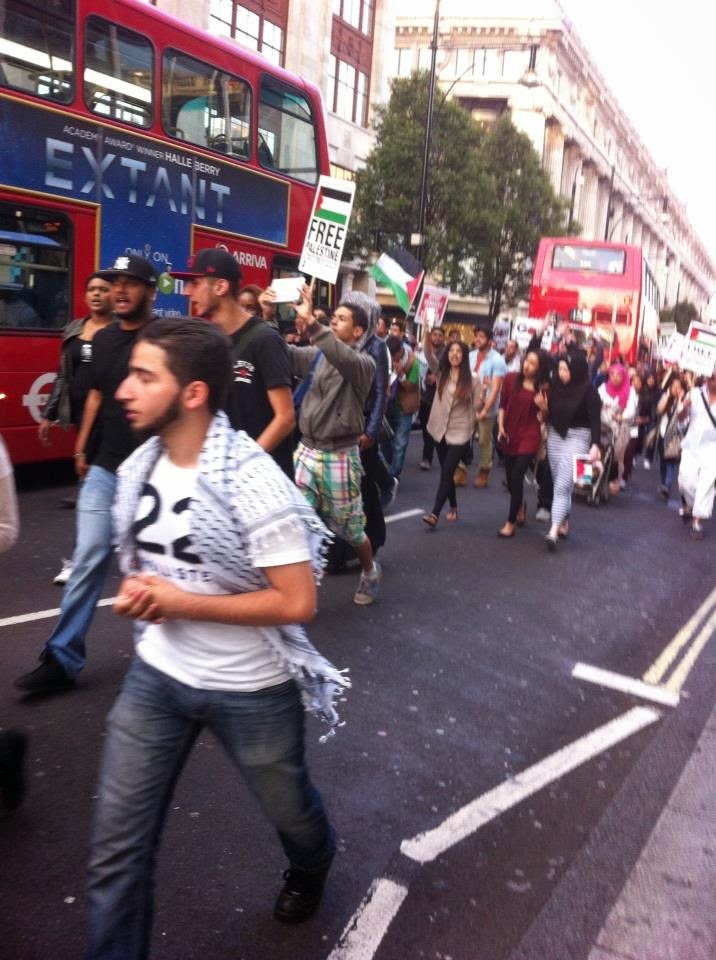 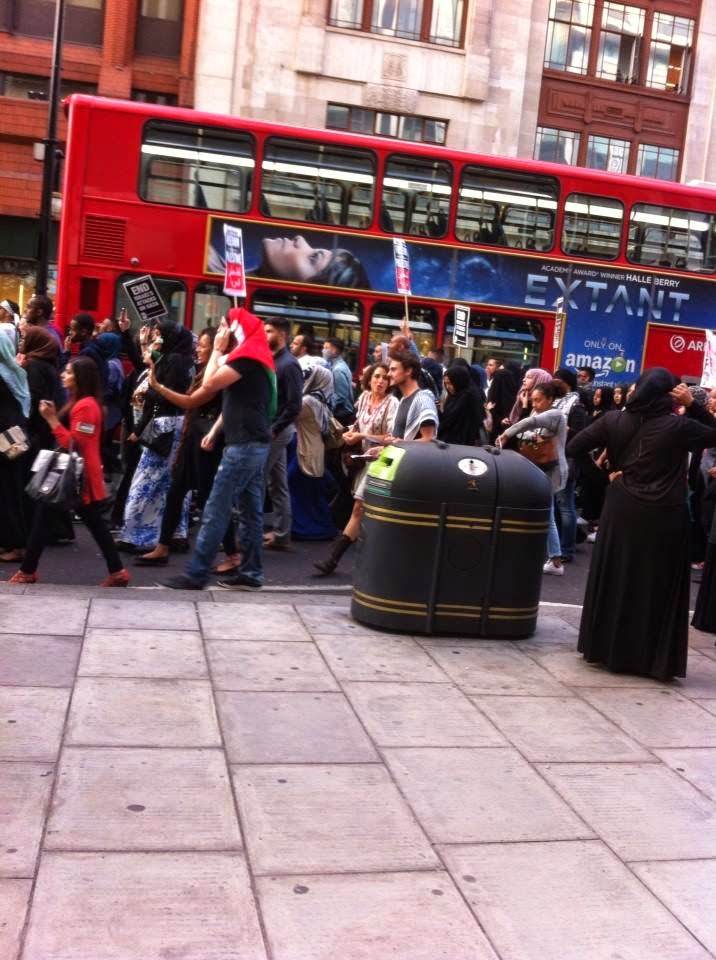 The UK's anti-Israel frenzy knows no bounds. My best friend's wife "Charlotte" (a 5 feet tall 57-year old lady who wants this story publicised but wishes to remain anonymous) was surrounded and assaulted by several Muslim anti-Israel fanatics in the middle of Oxford Street in broad daylight. She was shopping there when the demonstrators came marching down the road shouting "Free Free Palestine and Zionists murderers". The photos she took here are from just before the assault (next bit is an update to the original posting). Charlotte (who is a proud Jew) said:


"As they passed by with their disgusting chants I said 'Why are the Palestinians firing rockets at my daughter in Tel Aviv?' At that point they cried out "get her" and several of them left the march and came on to the pavement. They surrounded me, pushing and yelling Jew/Zionist/murderer/thief. One of them stole my phone, but a steward who witnessed what happened was able to recover it 5 minutes later. I was shaking and my neck now hurts. It was awful for me - how is this possible in Oxford Street in 2014?" 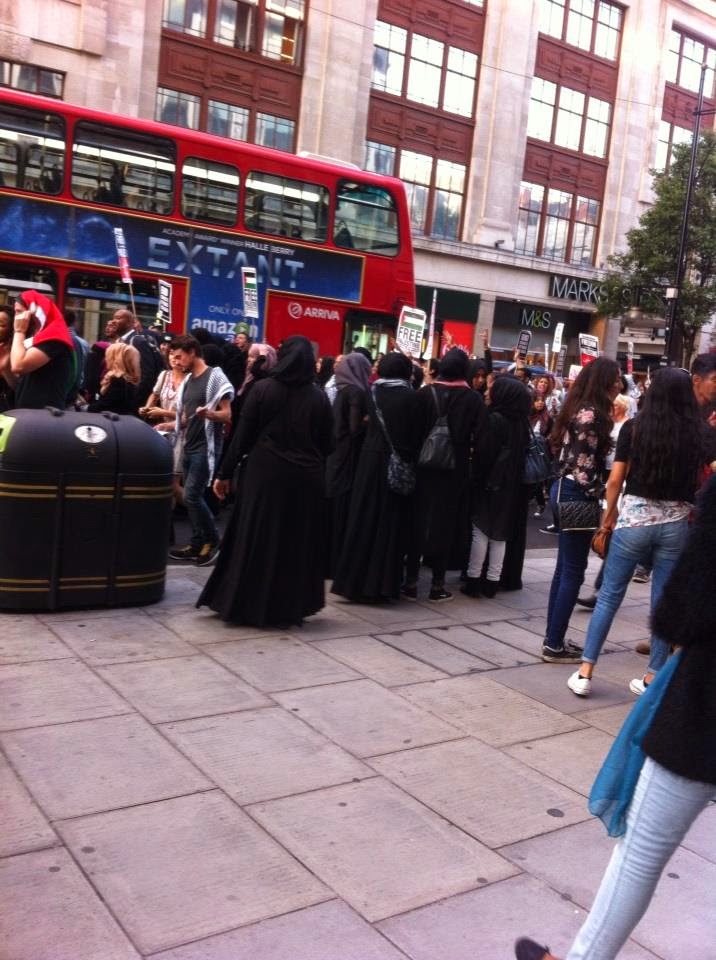 Bizarrely, the demonstrators were marching from the BBC building in Regent Street where they had been demanding an end - would you believe - to the BBC's "pro-Israel bias" (update: Daphne Anson has a report on the demo). The police have now allowed 4 violent anti-Israel demonstrations in central London in the last 2 weeks and another massive one is planned for Saturday****. That one is being led by the "Stop the War Campaign" - ironic given that it is the Palestinians today who decided that they did not want to stop the war under any conditions after Israel agreed to a ceasefire. Also ironic given that the "Stop the War Campaign" (which was originally set up to oppose the war in Iraq) has not managed to hold a single demonstration against the war in Syria (200,000 dead in 3 years), the current one in Iraq (100,000 dead in the last 6 months) or the myriad of other conflicts around the world where Islamists are murdering people every day in the name of their religion. 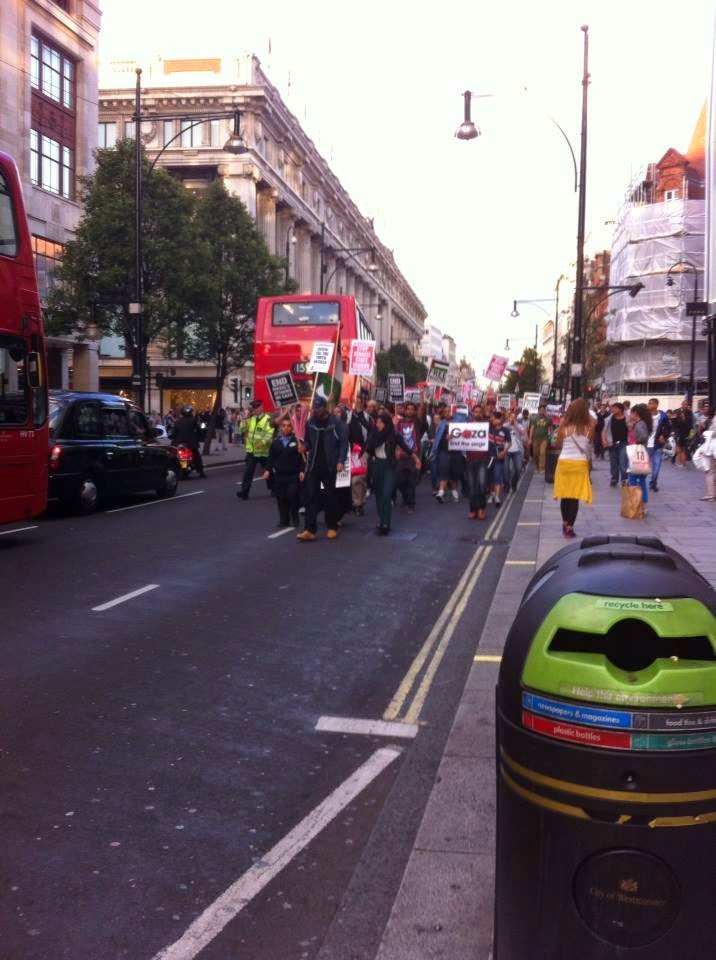 In 1943 - when the extermination of 6 million Jews was in full swing - a handful of Jews in the Warsaw ghetto refused to be willingly taken to the gas chambers and mounted a resistance against the German army that lasted 3 weeks before they were all killed. Now imagine if during the time of the  Warsaw ghetto uprising thousands of Nazis took to the streets of London every day (supported by the entire British media) and demanded that the Jews of the Warsaw ghetto be destroyed for daring to resist the Nazis. That is exactly what the current anti-Israel frenzy feels like and the analogy is not at all far fetched. The Palestinians - like the Nazis who they so admire - have made it very clear that they will not stop their terrorism until every Jew is dead; for daring to resist that the Israelis are cast as the Nazis while the antisemitic media - fed a pack of lies by the well mobilised Islamist-Socialist alliance -  showers its sympathy on the Palestinians casting them in the role of the persecuted Jews (even though Palestinian officials acknowledge that their missile offensive that began last month is a crime against humanity).

The world has turned upside down.

Update: How the Sun is stirring up the anti-Israel frenzy. 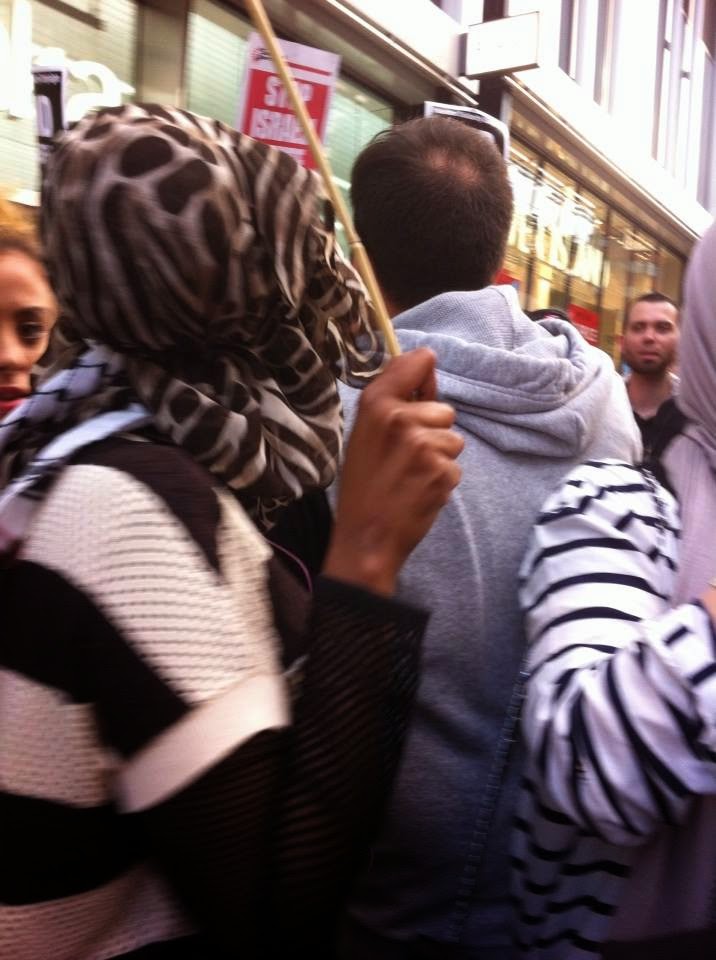 ****Typical of the demos was this one outside the Israeli embassy where the demonstrators blocked the main street for hours and climbed on to a bus;  the Police never seem intervene and never make arrests. yet as I reported here when 800 (mainly Jews) wanted to hold a vigil outside the embassy in memory of the murdered Israelis teenagers the Police did not allow us to stand on the pavement in the main road outside the embassy - we were instead herded into a tiny side street.  This is a phenomenum I have reported on several times in the past (see e.g. here, here, and here)

Update: More pictures (but not especially interesting) from the demo here.

Update: How many casual antisemitic incidents like this one are going unreported in London?